What’s the first thing that comes to your mind when someone mentions the USMNT to you? Usually, its that there awful, a joke, and a national embarrassment. How can we be so advanced in the women’s game and be so bad in mens, it doenst make sense. We struggle to consistently compete against CONCACAF opponents, no more evident than our failure to qualify for the 2018 World Cup. We needed a measly point against Trinidad and Tobago in Couva to qualify for the world cup and we get dominated and here we are.

While we can point to many problems within the USMNT from the mismanaged federation to the lack of diversity in the US system as a whole, nothing is more important than our lack of quality players and depth. Much has been written about the “Lost Generation” of US talent born between the years 1990 and 1994 with a continued bad year in 1996. This span of 5 years produced very little talented players that have transitioned into major roles with the USMNT now. That trend finally caught up to us with the qualifying for the 2018 World Cup. We had very little talent that was on the cusp of hitting the prime of their carers and had to rely on players who either were either past it or players that were young and talented, but not yet ready to carry a team. These players include Micheal Bradley, Tim Howard, Omar Gonzalez, Tim Ream, Graham Zusi, Nick Romando, Christian Pulisic, etc. Much of the responsibilities fell on the shoulders of our young superstar, Christian Pulsiic, who was by far our best player that cycle, but was not quite yet ready to yet be a leader. This talent gap is still present today, as the players born in the early to mid-’90s should be in their primes and leading our team to glory. That isn’t happening however, as many of those players just don’t exist, and we are forced to really on players who are all under the age of 22.

We as USMNT fans might just have to give up hopes of being a competitive team in the near future, and take our hopes and dreams and look to the horizon, as I believe we are about to hit a golden generation of talent never yet before seen in this country.

Let me preface this list by saying that this is just the tip of the iceberg when it comes to USMNT prospects, as players stock rises and falls in months. These lists are so volatile and could change in the next months as players hit their ceilings and new players rise out of nowhere. Also, these prospects could not be here shortly, as many of them are dual nationals and have the option to represent other nations in the future. So there’s always the chance we lose another prospect int he coming years. I will also only be including players who have fewer than five caps to the senior international team on this list.

These are the players I believe to be locked for the USMNT picture even if they never reach there highest potentials. Some of them could become stars and others might just be role players. however, I feel that they all will contribute a great deal.

Alex Mendez has the potential to be one of the greatest midfielders we have ever created as a soccer nation. already plying his trade in Amsterdam at one of the best youth academies in the world, Ajax. Mendez has one of the sweetest left feet I have ever witnessed in an American prospect, as seen in the clip below, if he sticks with our program he will be a fixture for 12- 15 years and maybe longer.

Alex Mendez is ready for the U20 World Cup. Beautiful free kick goal from this morning 🔥🔥🔥pic.twitter.com/i8NmoXmJmK

You probably wouldn’t know it by looking at him, but Reyna is only 16 years of age. The son of USMNT legend Claudio Reyna recently moved to Borussia Dortmund after securing his EU passport. Since arriving he has been dominating the U-19 division and got a hand full of preseason minutes in his limited time, and already looks on the fast track to full first-team minutes sometime in the next year or two. While it might seem speculative to place a 16-year-old on this list, I don’t think so as Reyna already looks like a man amongst boys and has the pace, technique, and engine to be an elite next tier player for years to come.

Simply unstoppable on the ball at this level. Picked up another assist. 1 goal and 3 assists so far in 4 games. pic.twitter.com/qRO4c51zkt

Richards had a huge 2018, bursting onto the scene from nowhere. He first came to prominence when he was one of the first players to be transferred to Bayern Munich as part of the exchange program between them and FC Dallas. His amazing rise to stardom in the USMNT scene was capped with a magnificent U-20 World Cup this summer which saw him named as one of the top prospects of the tournament. If he continues this rise he could become one of the best center-back ever produced by our country.

Richie Ledezma is anther prospect who enjoyed an astronomical rise in 2018. He moved from the RSL academy to the Dutch team PSV in December. Sidelined by injury in early 2019 made him just miss being a starter at the 2019 U-20 World Cup this summer, however, Ledezma shined bright in his short appearances. He has all the tools to become a highly-skilled number ten that could have a long and successful career with the USMNT.

How good is this from Ledezma? Picks up the ball at half-field, drives forward, passes the ball outside, and immediately makes a GREAT run into the box and probably should have scored. How you create something out of nothing.pic.twitter.com/jmplwfYgph

Sergino is another one of these players that have had a breakout season. He was recently promoted to the Ajax first team, which is a huge accomplishment for an 18-year-old American and is even playing in the champions league. Dest is probably our best full-back at this moment and I hope that he decides to stay with us instead of going with the Dutch in the future.

These players are a little more hit or miss if they will pan out and there are a lot more of them floating around our pool.

Carrera recently chose to play for the USYNT instead of El Tri at the 4 Nations tournament in the Netherlands, in what is a huge coup for our weak center back depth. Carrera has shown himself to be an incredibly talented defender with a bright future ahead.

Another player that has enjoyed an astronomical rise this season, he has had a breakout season at FC Dallas. He looks like a complete attacking playmaker, with really fast feet and a killer ball, he could become something special for the USMNT in the near future. Let’s hope he can find his way abroad to expand on his potential.

Bello would be a lock for me, however, he is coming off a severe injury that kept him out of action for a long time and thus I dont know if his ability has dropped off at all. If he can reach his prior heights he will be a fixture in the USMNT pool for a long time. 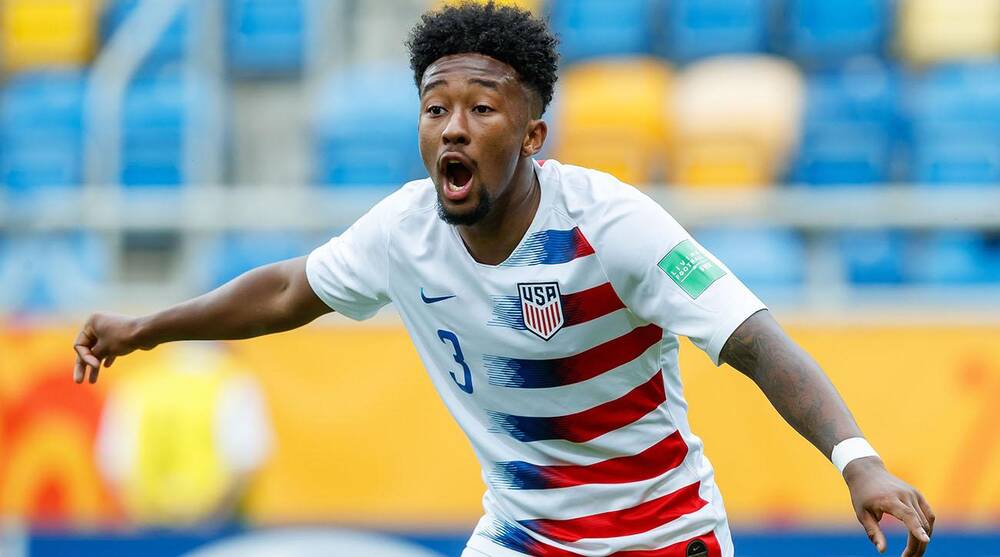 Gloster should make it to a solid senior team member, however, I just dont know to what capacity he will be a fixture in our pool in the future. If he can get his career together at PSV he will have no problem breaking into the senior team.

So steady and composed on the ball, I thought it was a very good debut for Gloster. pic.twitter.com/hmYdXXLMzi

Soto came off last season on a high after gaining his first-team Bundesliga minutes, howevr things went sour after Hannover were relegated. Soto tried to force his way out like his compatriot Chris Gloster, however, a move never materialized and he is stuck at Hannover. He will need to get his career together quickly and find a move out of Germany as soon as possible.

Kobe looks like a very solid defensive prospect out of the LA Galaxy academy. He was recently called up to the U-17 camp and started games in the 4 Nations tournament alongside players like Carrera. He should become a contributor to the senior team if he can realize his potential and maybe move abroad to Europe if the chance does arise.

Pepi is having a phenomenal season at FC Dallas and has become a regular for the first time while splitting time in the second division. If he realizes his potential he could be stand out in what is looking like a very deep striker pool in the future.

Carleton needs to get his act together, as his attitude has made his ranking amongst top USMNT prospects slip drastically. It’s not a question of skill rather than getting his priorities straight. Whether that be making sure not to party before a large cup game or forgetting his passport for an international game. I hope he can turn it around.

The son of the disgraced ex-American coach Jurgen Klinsmann has had an up and down career. After spotlighting for the US at the 2017 U20 World Cup, he moved to Germany where he was stuck in a perpetual motion of promotion and relegation from senior to youth teams. He has made his way to a Swiss team so let’s hope he can get his stuff together.

EPB has had a rough time since leaving Man City, however, he has found his way to the Austrian side Austrian Wien. Let’s hope he can get his career back on the track and become a staple US defender like he was promised to. 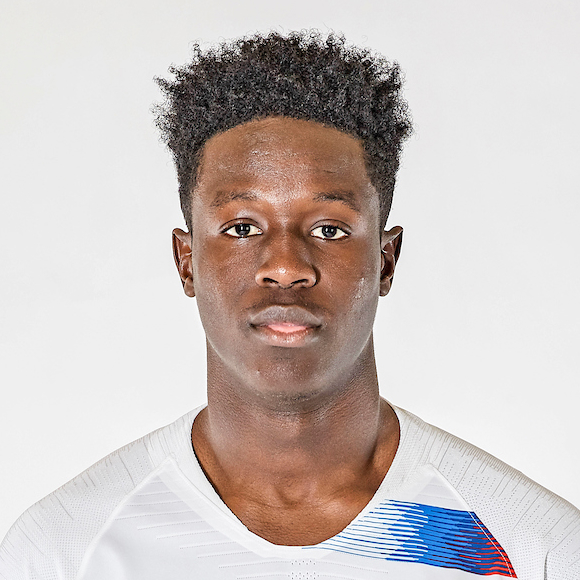 After a hit and miss U20 World Cup where sometimes he looked liked Jerome Boateng and other times like Frank Sinclair. He’s young and just growing into his body so we will have to wait and see what he becomes in the coming years.

Parks had a breakout season in 2018 which saw him explode onto the USMNT radar even earning a cap, but his poor play for Benfica and inability to break into the first team earned him a loan to NYCFC. To be fair he has been having a pretty good season so far so let’s hope that he hits his strides again and ends up back in Europe or permanently with NYCFC.

Oh, poor Nick Taituague. Once promised to be a generational talent coming up through the ranks of Schalke’s academy. the kid just can’t catch a break with the numerous injuries he has sustained while at Schalke, let’s hope he gets a full season under David Wagner and maybe break into the First team by the end of the season.