Syracuse University plays a majority of their sporting events in the Carrier Dome, the venue also hosts concerts and other major events. Between each event changeovers occur to accommodate the next event. These changeovers require a lot of people and teamwork to prepare the venue.

Recently, I was part of the changeover crew. I participated in two changeovers: a breakdown and a setup.

These changeovers begin immediately following the conclusion of the event being played that day. The crew for each change consists mostly of Syracuse University students. The two times I participated, I showed up while the game was still going on, and was assigned to sit with the crew as we waited for the game to conclude. We were then assigned to roles to begin the changeover.

The breakdown of the basketball court following the Women’s game is only 50 yards. Following the game, the first assignment of the night was stacking all the chairs that are lined up on the makeshift bleachers at the floor level of the court. Crew stack the chairs just a few inches smaller than the average person and then they are carried away on a hand truck to a closet underneath the stands.

A small crew of men are assigned to taking apart the basketball court.

Following this, the makeshift stands, bleachers, and staircases are put away and the men divide into pairs and the women begin uncapping the locks in the floors. The caps cover the locks from being broken or interfered with by fans during the games.

The crew begin using T-tools (see in the picture to the right) to unlock the mats that make up the floor of the Dome during basketball games. This is where the real work begins, as the pairs of workers begin to pick up each mat (referred to as a “Bravo”) and stack them on palettes either 20 or 25 “Bravos” high. The disassembly of the mats begins at the 50-yard line.

These mats are not difficult to pick up, but the work becomes tedious and can become very tiring over the course of the night. I was grateful the breakdown was only 50 yards that night. Once the stacks get about 15 mats high you have to shoulder press the mats on top of each other to complete the stacks.

Underneath the basketball court there a special bravos. These bravos have a different type of surface that are referred to as a “diamond plate.” These mats are stacked on separate palettes to make sure they are not separated from each other.

Following the removal of all the bravos and equipment that could be associated with the event, such as the basketball hoops, the final task of the evening is for the crew to line up, shoulder to shoulder with a garbage bag in hand, and walk from sideline to sideline picking up any garbage from the field. Items found on the field range from popcorn that slipped through the floor tile, to pieces of turf that were yanked up.

The changeover takes about three hours to complete. I had arrived at 8:30 that evening, the women’s game ended about an hour later, and I was finished that evening at 12:30 a.m.

Following that weekend, I returned at 6:30 Monday evening to set the basketball court up. This was a 100-yard changeover. It required more people and  a lot more work. The set up began at the conclusion of the Syracuse Women’s Lacrosse game.

Following the game, the bleachers were pulled out and palettes filled with the bravos we had previously stacked were pulled back out and positioned at different areas along the field. 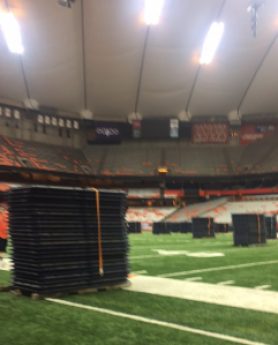 Once there were stacks to about the 40-yard line, the crew then had to lay each bravo and connect them. As they were connected other crew followed behind locking them. This process was done for the entirety of the field.

I preferred the set up to the cleanup as I found it easier and less strenuous (but not by much).

When we had finally gotten within the last twenty yards of the far side of the field, the manager divided the crew and had made three groups. The first group finished laying the bravos over the remainder of the field. The second group went up one of the sidelines and laid bravos between the field and the wall where the seats were. The third group was assigned to the assembly of Boeheim’s court.

Finally, with the entirety of the field covered, the bleachers were pulled out of the far side end zone and lined up courtside. Meanwhile, everyone who wasn’t setting up the basketball court was capping the bravos’ locks to make sure they stay attached and the locks aren’t broken during the game. Next, the courtside seats’ platforms were set up with additional bravos, and then the chairs that we had stacked Thursday were set up as neatly as possible. The final act before the set up was complete was bringing in the stairs to set up behind the bleachers. We had to exit the dome and in teams of eight, push two large stair structures on wheels into the dome and behind the bleachers.

The video below is a time-lapse that shows a 50-yard basketball set up happening.

Overall, I would say this experience was a great one.

As a sport management major, and someone who really enjoys learning new things, this experience showed me the behind-the-scenes work that is done to produce the events watch everyday. Even if changeovers or facility management doesn’t materialize into a career path for myself, seeing the work and experiencing it firsthand, gave me a newfound appreciation for the work that is put in when no one is watching.

To those who do not realize it, the work these employees do to maintain the facilities and set them up for fans and athletes should be appreciated more and add to our experience of these events.

Error: admin-ajax.php test was not successful. Some features may not be available.

Please visit this page to troubleshoot.